Reading, Signing, And Q&A At "It's Not Dead 2" Festival

If you're heading to this year's "It's Not Dead" Fest, I'll be doing a reading from NOFX: The Hepatitis Bathtub and Other Stories in the "Punks Well Read" tent.

It'll be followed by a Q&A, so come prepared with any questions you might have about the book! Copies will be available for purchase on site and I'll be available to sign them after the Q&A.

(And then I'll be dancing to The Selecter! Hope to see you there!) 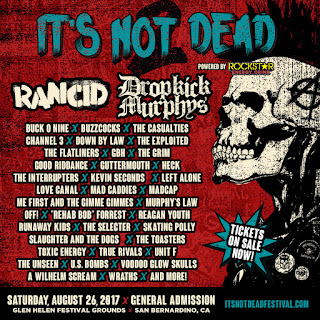 For years I've talked about starting a travel blog...I've finally turned all that talk into action!

Check out a sample of the NOFX Audiobook! (German translation and limited edition hardcover also available!)

Many people have asked about an Audiobook version of the NOFX biography, and the band has delivered! Fat Mike, Eric Melvin, Smelly, and El Hefe each narrate their own chapters, and Jello Biafra and Tommy Chong narrate the chapters of former band members Steve and Dave. Check out a sample of one of Tommy/Dave's chapters below:

You can pick up the CD version on Amazon or Barnes and Noble or you can download it directly from Audible.

German-speaking fans should also know that the book is now also available in Deutsch!

And Fat Wreck Chords has printed up a limited edition HARDCOVER version of the book that they are releasing as a collector's bundle. It comes packaged with a color 7" featuring four never-before-released songs that the band recorded in a basement in 1987 and an oversized Hepatitis Bath Towel!

Thanks again to everyone who has picked up a copy of the book (in whatever format or language) and thanks for the continually awesome online reviews!

More translations are on their way... Stay tuned!