“Just get a calendar.”

“Do you have a calendar?”

“Today’s the day you became the lead singer for Dead Kennedys.”

The American Dream boils down to two scenarios.  1.) Winning the Lottery.  2.) Joining your favorite rock band.  I had just received a phone call to say that I, like Sid Vicious, Henry Rollins, and Tim “Ripper” Owens before me, had just achieved the less likely of the two.

I didn’t believe Landon at first.  Not a lot of people would have.  It took a good half hour or so of convincing, and even then I still suspected that the whole thing was a really cruel practical joke.  If it was, I very much prepared to cut Landon out of my life as a friend, just as swiftly as I would cut open his throat and remove his trachea.

Landon, incidentally, was the voice on the other end of the phone.  He fronts a band called Sidekick.  I met him at Al’s Bar when I first moved to L.A. and our mutual love for the Chicago punk band Screeching Weasel immediately cemented our friendship.  Sidekick often ripped through Screeching Weasel covers and when they did Landon would graciously allow me to get on stage and sing with them.  Always a good time.  The years went by and, despite numerous people encouraging me to pursue singing more seriously, rocking occasionally with Sidekick at dive bars around L.A. was pretty much the most musical glory I ever expected to achieve.

Then Dead Kennedys reunited and Landon became their tour manager.  I was happy for my friend, but I, like most fans, was skeptical about the reunion with Brandon Cruz filling in on vocals for Jello Biafra (who had grown estranged from the band due to a far-too-much-discussed legal battle).  Landon agreed to get me into their first L.A. show for free so I could satisfy my curiosity.  All week I knew I was going to see Dead Kennedys.  The ticket said “Dead Kennedys.”  The marquee said “Dead Kennedys.”  But it wasn’t until I was standing at the edge of the dance floor when the band launched into their first song that I realized, “Holy shit!  That’s Dead Kennedys!”  A smile parted my lips and I quickly squeezed my way into the crowd to sing along with all of my favorites.

Brandon had done a superb job and after the show I told Landon it was a job I wanted.  I was half-joking, but it was a half-joke I’d make repeatedly over the course of the next year.  I thought I was wasting my breath, but, sure enough, one day Brandon stepped down and Landon endorsed me for the job based on my love of Dead Kennedys and the fun he’d had sharing a stage with me.  And for some reason three of my biggest musical heroes trusted his judgment.

A little perspective here: Dead Kennedys formed in 1978 and became one of the most influential bands in the punk genre.  Even my parents know who these guys are.  “Fresh Fruit for Rotting Vegetables” was one of the first punk albums I ever owned.  I remember jumping on my bed as a teenager, singing along to it and thinking to myself how cool it would be to one day sing with the band.  At the time, I immediately dismissed the notion, thinking to myself, “first of all, they broke up years ago and they’ll never get back together.  Second of all, even if they do get back together, it’ll be with Jello.  And third of all, even if they do get back together without Jello, how would they EVER find me and why would they EVER let me up on stage with them?”  I vividly remember all of those thoughts going through my head, and thinking to myself that I should keep a lid on my idiotic fantasies.

Simply getting to practice with Dead Kennedys in Landon’s small, dingy practice space in Hollywood was enough to squash the cynical voice in my head that told me to stop fantasizing all those years ago and to give me a story to bore my grandkids with.  But then I got to play a secret show with the band at the Viper Room with all my friends in the audience cheering me on.  Then we got to play shows in Norway.  And Istanbul.  And Mexico City.  And all over the U.K.  Every trip was an incredible adventure, each worthy of its own separate article.  There’s story after story to tell, based on surreal moment after surreal moment.  For instance: in Scotland, we played a club where I had seen a punk show back in ’98.  I never imagined I’d be back at that club.  Let alone on its stage.  Singing to a sold out crowd.  With Dead Kennedys.

Further, I could write articles about the way the music of Dead Kennedys shaped my drastically left-leaning political ideals and how grateful I am for the opportunity to speak to crowd after crowd about the importance of open-mindedness and political participation.  I could write about the bonds I’ve formed with three very quirky musicians who formerly existed in my life only as sounds coming through a stereo speaker and names on an album cover.  I could write pages and pages about the importance and timeliness of the Dead Kennedys reunion in relation to both the current punk rock scene and the world at large.  Believe me, a person in my position has a lot of things to think hard about and gets a lot of frequently asked questions.  But today I’m only allowed to share 1500 words with you, so the rest will have to wait for some other time.

For now I’m just enjoying the ride, because the one thing I can’t really speak about with any certainty is where this is all going to go.  Maybe we’ll keep touring, maybe we’ll record new music, or maybe it’ll all end tomorrow.  At first, the unpredictability of the situation really messed with my head, but I’ve made peace with it because I’ve learned to appreciate the fact that I’ve been able to live out an insanely fantastic dream, the scope of which I can still barely comprehend.  It’s all cherries on top of the icing on top of the multi-tiered cake at this point.  Maybe there should be some sort of punk rock twist to this story to make it all edgy or dark or something, but there’s really not.  It’s a fairy tale.  It’s a dream-come-true scenario, and it’s been an overwhelmingly positive experience.  If I wrote a song about it, it would sound more appropriate coming out of Jewel’s mouth than mine.  It’s done nothing less than change my entire outlook on life.  It sounds excruciatingly cheesy, I know, but it’s the truth.  After all, I used to really relate to the Dead Kennedys song “Forward to Death”, which contains the lyrics “I don’t need this fucking world / This world brings me down / Gag with every breath / This world brings me down / I’m looking forward to death.”  But now it’s the one song I feel weird about singing because for once in my life I’m NOT looking forward to death!  I’m having too much fucking fun!  Even when things are at their shittiest and I’m forced to look into the darker side of my soul, I’m able to turn myself around because I’ve learned that life can take radical turns for the better just as easily as it can take drastic turns for the worse.

Roughly ten years after my first exposure to the music of Dead Kennedys, I was on an airplane bound for a tour of Norway, seated between Landon and drummer D.H. Peligro.  As we taxied onto the runway I looked back and forth between the two of them and said to Landon, “if this is a joke, you’re really taking it too far.”  Landon laughed and assured me that it was for real.

I still don’t know if I believe him. 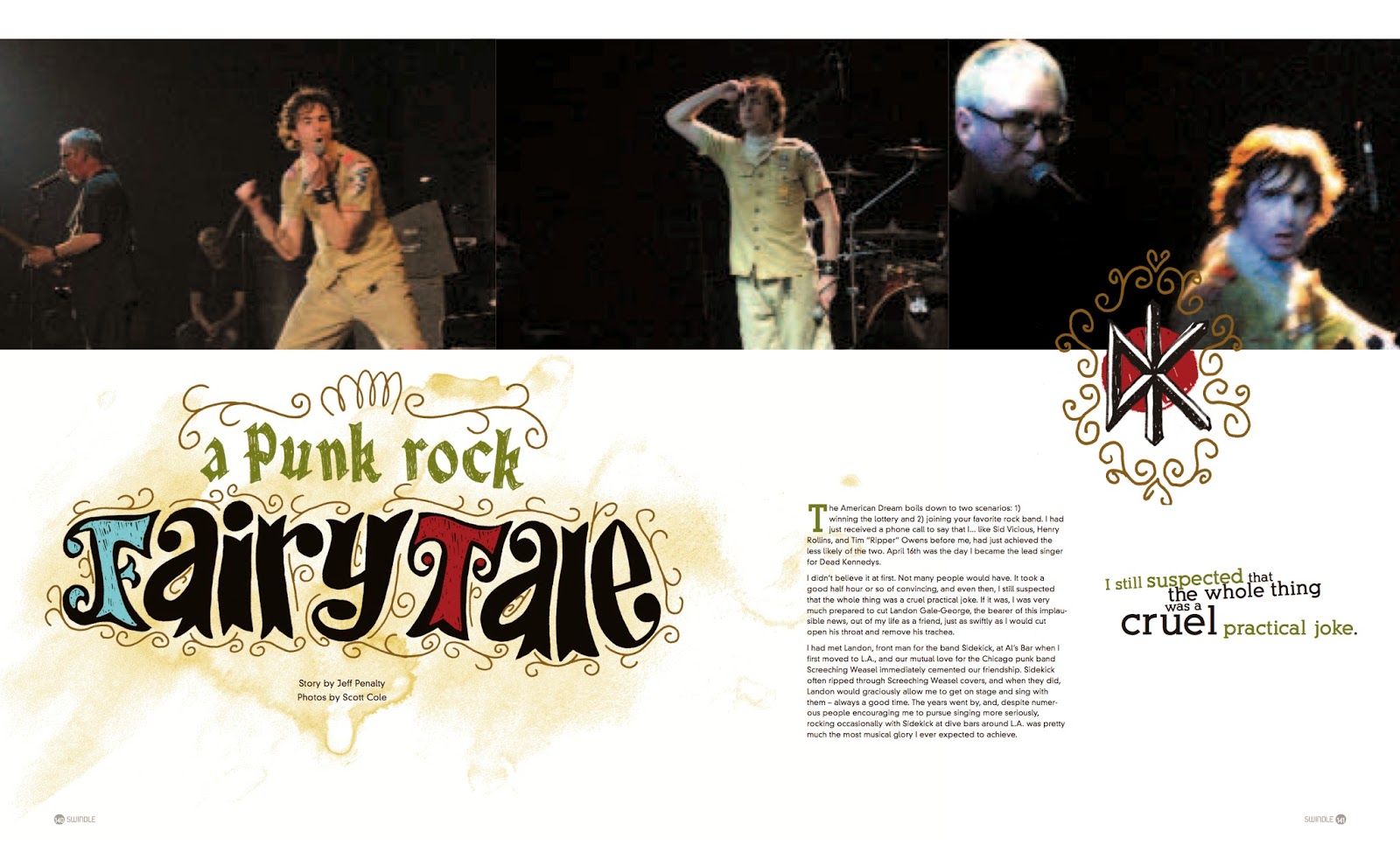 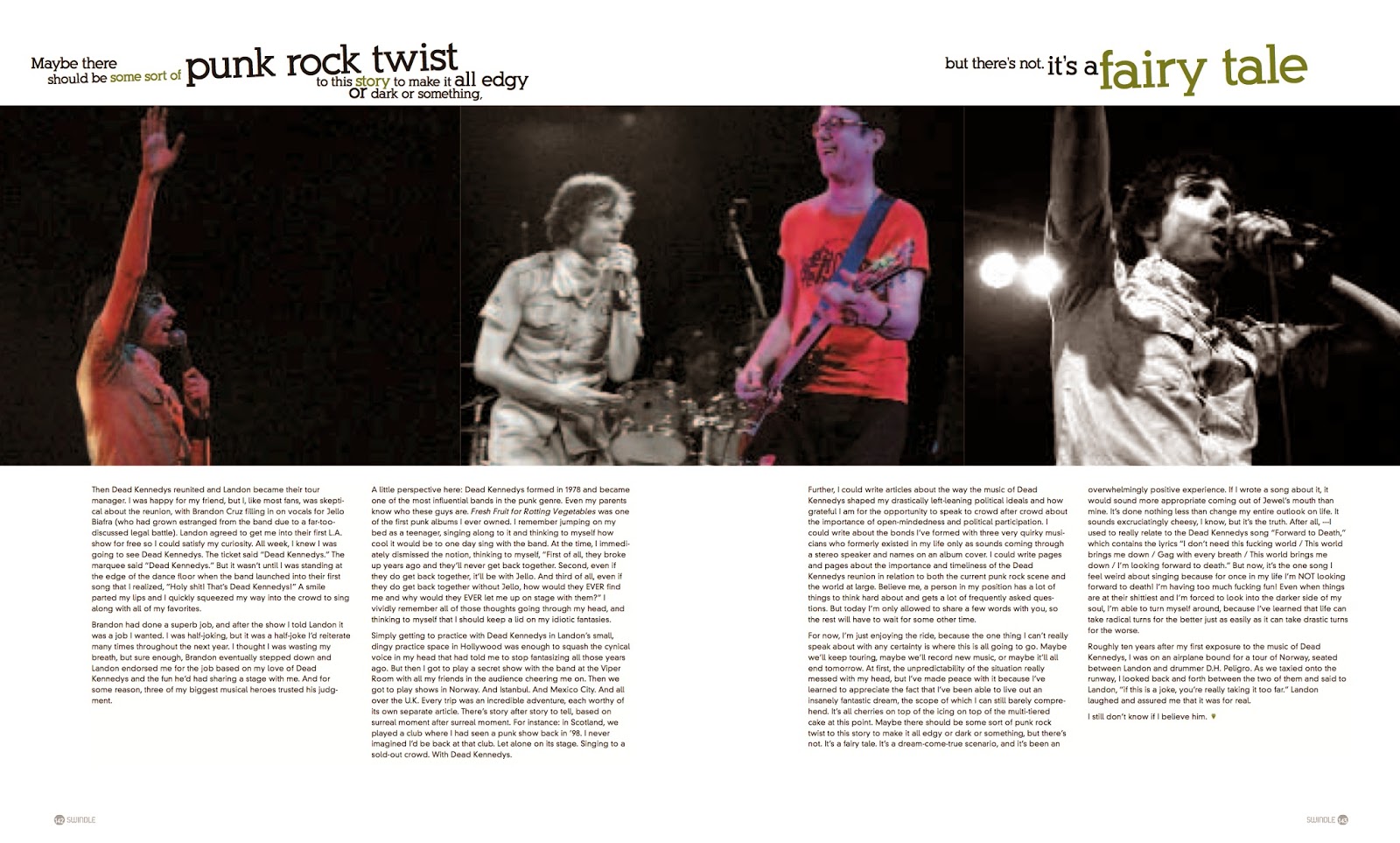