THE SODA POPULIST
By Jeff Penalty
(Originally published in Swindle #6, re-published in The Utne Reader)

Have you ever bitched about the fact that your cable TV company decided to jack up its rates simply because they could?  Has your blood ever boiled thinking about the way major labels are keeping good musicians down?  Have you ever thrown your hands up in despair at the piss-poor choices on the ballot for any given American political office?

Take heart, comrades…John Nese is here to lead the revolution!

John runs the Soda Pop Stop in Eagle Rock, CA, a store that specializes in hard-to-find (if not impossible-to-find) soda pop, carrying over 500 varieties.  I walked into his store assuming I’d be writing a fluff piece about fizzy sugar water, but I walked out with a startlingly vivid illustration of corporate oppression and the disturbing effect it has on every aspect of our lives.

I started by asking John, “Why soda?”  He answered with a smile: “I got mad.”

John’s story is an American fable.  He inherited the family grocery business from his father, but, like all independent grocery stores, he found himself struggling to compete with the price clubs and major supermarket chains.  He started carrying a few rare varieties of soda as a means of keeping the business afloat.

And then one day a representative from Pepsi came into his store to convince him to stock the brand.  At the price the rep was offering (remember: no bulk wholesale discount for a small shop like John’s), John would’ve had to charge more for Pepsi than the chain store down the street, and he would’ve felt like he was ripping off his customers.  So he told the Pepsi rep he’d rather refer his customers to the chain.

I listen intently as John explains the politics of soda pop.  The thing about Pepsi and Coke is that they have the money and clout to purchase shelf space in all of the major grocery chains and price clubs, so there ends up being no space—and little incentive—for stores to stock drinks produced by independent bottlers, even though dozens, if not hundreds, of such bottlers exist.  So as consumers, we’re left with merely the illusion of true choice, choosing between two colas that taste basically the same, and which aren’t really all that great to begin with.  As John points this out, I am suddenly stirred with both anger and sadness, staring at aisle after aisle of proof that corporate rule has officially infected every single aspect of our lives, robbing us of our freedom of choice and holding us hostage to the whims of the C.E.O.s.

My head already reeling, John begins my tour of his shop by telling me about Red Ribbon Root Beer.  Until the ‘60s, root beer was made from sassafras root oil, which was taken off the market because it causes cancer.  Red Ribbon uses sassafras bark (which, thankfully, doesn’t cause cancer), and it is the only root beer on the market to do so, giving it the most authentic taste possible.  It even changes flavor as it ages!

Next, John let me sample a mint julep, because unlike most of you southern plantation owners from the 1800s out there, I’ve never had one.  And it was so refreshing that I have since found myself walking around and actually saying, “I could really go for a mint julep right about now.”

I was also curious about Moxie, a company out of Maine that I thought had ceased to exist around the same time Hollywood started making “talkies.”  Yet there on the shelves were several varieties of Moxie: Original Elixir, Cream Soda, Orange Cream Soda, and Cherry Soda.  John swears by Moxie Cream Soda, declaring it the best cream soda on the market.  He sent me home with a bottle that I later shared with a friend, and neither of us found any reason to argue with John’s assessment.  He also sent me home with a bottle of the Original Elixir, which he cautioned I might not take to right away.  “It’s a sipping soda,” he said, claiming that it would actually change flavors while I drank it.  And it did: each sip started as a cola, morphed into a root beer, and left the aftertaste of some sort of evil black licorice potion from Satan’s private reserve.  I can’t say I wasn’t warned.

“Have you ever had a pomelo?” John asks, uncapping a bottle of Quench and handing me this soda flavored with the first cousin of the grapefruit.  Down another aisle, he holds up a bottle of Manhattan Special Orange Soda to show me the pulp at the bottom, proving that it’s flavored with actual oranges.  Later, he tells me about an angry phone call he placed to the makers of Tommyknockers Root Beer to complain about their switch from Madagascar vanilla to vanillin in their recipe.  He tells me about the elderflower soda he’s anticipating from a Romanian bottler and the rose flavored soda he has coming in for Valentine’s Day.  The possibilities and permutations seem endless.  And, in fact, they are.

Upon a return trip to the Soda Pop Stop one afternoon to share the joys of a mint julep with a friend, I tried to get John’s attention, but customers were coming at him from all sides, asking for his recommendations the way they would a seasoned sommelier at a Napa Valley winery.  One customer told John, “You’ve got me hooked on the Boylan’s Cola!”  And I realized that we were all there because we’d had a door opened for us: a door to a whole world of fun, adventure, and taste.  It’s a door that should have been open to us from the start but which was barred by capitalism gone sour.

People from all over the world are thanking him as well, both in person at the store or by ordering their favorite sodas by the case via his website.  So dedicated is John to the cause of good soda, that he’s even trying to locate molds to make the metal parts for those now-out-of-production seltzer bottles popularized by the Three Stooges.  With a bottle of seltzer and some raspberry or chocolate syrup that John sells at the end of one aisle, you can even make your own sodas!

“If it was about nostalgia,” John says, “it’d have been over in five years.  It’s freedom of choice.”

Upon a third trip to the store to enlist yet another friend in the soda revolution, I find John outside, hammering something out of the sidewalk.  When he’s done, he lets us sample a bottle of that much-anticipated rose soda (delicious, by the way!) and explains that earlier in the day some workers came by to install a newspaper box in front of his store.  He asked them for the proper paperwork from the city, but they didn’t have it, so he told them to come back when they did.  They started to install the thing anyway until he told them to bug off again.  And then, rather than roll over and take it, he went outside to remove—by hand—the hunk of metal they’d just put in his sidewalk.

It’s a subtle gesture that somehow seems to sum up John’s attitude perfectly.  His pride in his business and his individualist spirit practically amount to a Rockwell portrait of what it is—or rather, what it should be—to be an American.  It makes me think back to the way he concluded our very first conversation with an assertion that practically made me want to salute him:

“Am I Don Quixote?  No.  The important thing is that people have choices.  Not just with drinks, but with everything you do.”

As I shook his hand to say goodbye, he added with a smile:


”Don’t get me started on the education system…” 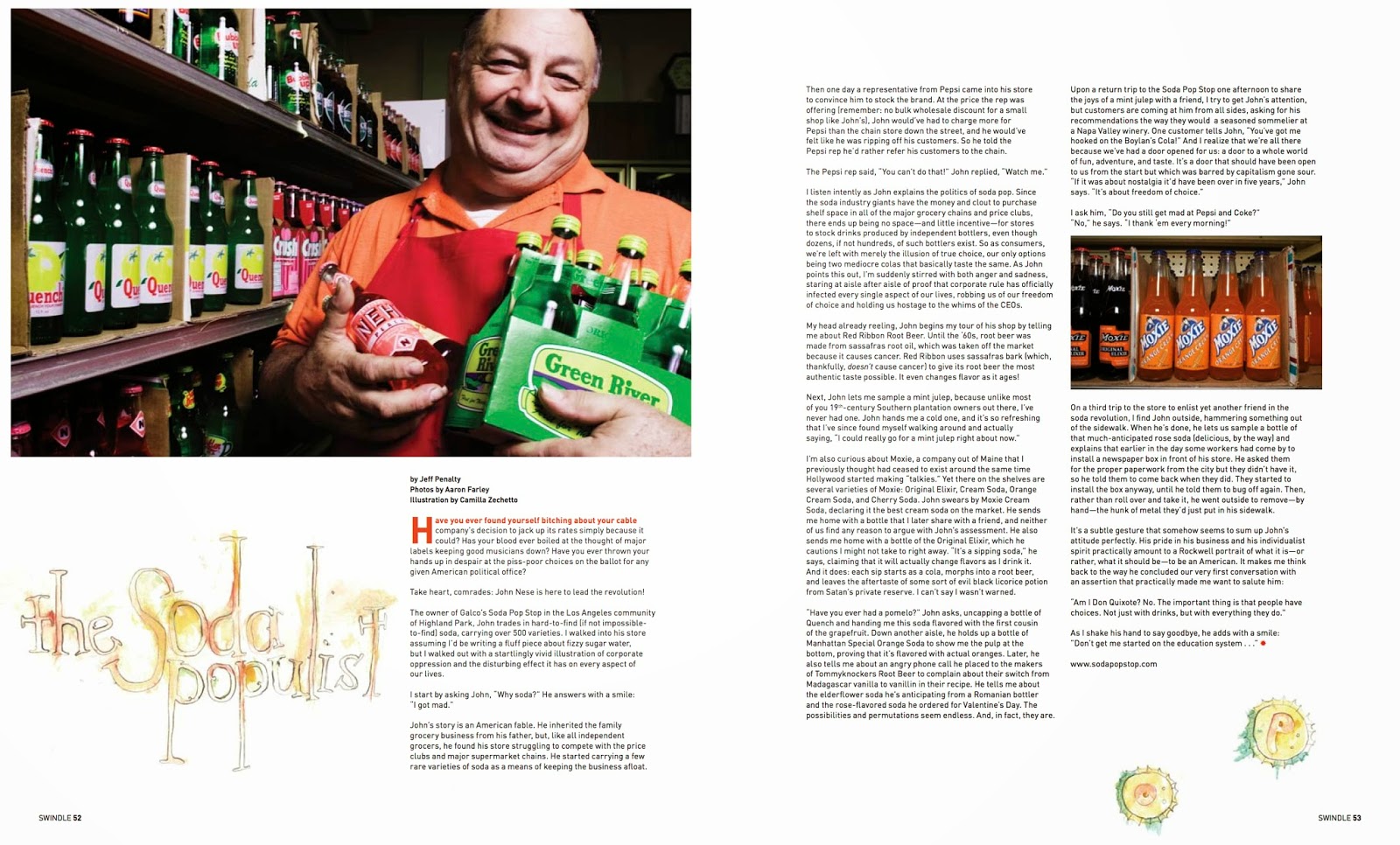