To an extent, people are right to pick on L.A. After all, I defy anyone to sit at the Rainbow Room for more than ten minutes without making a sarcastic comment about the Methods of Mayhem-era Tommy Lee wannabe at the next table. But buried underneath the thick layers of smog and cynicism, the true spirit of rock n’ roll is still pogo-ing away in the City of Angels.

If you put a copy of Bang Sugar Bang’s latest full-length, THWACK THWACK GO CRAZY, into your CD player, you will most likely be driven to play air guitar, laugh your ass off, and say to yourself (or even out loud), “holy crap!  THAT’S what rock n’ roll is supposed to sound like!”  Also, you will probably have a craving for beer.

And when they’re not spending their time writing new music (which they do at an enviable pace), playing shows (which they do several times a week on average), touring, or holding down day jobs, Bang Sugar Bang also maintains Kiss or Kill, a Tuesday night rock club Where Everybody Knows Your Name.  (And if they don’t know it yet, just show up two or three weeks in a row and they’ll be sober enough remember it eventually.)

So I present to you a band that doesn’t just walk the walk, but also rocks the rock.  I talked the talk with bassist/vocalist Cooper and guitarist/vocalist Matt Southwell over email so that I might help provide you, gentle reader, with a window into their souls.

JEFF: Give me one word that uniquely sums up your band's history, current status, sound, and attitude.
COOPER: Street.
MATT: Beer.

JEFF: If you were to hand someone who'd never heard your band a copy of your latest album, what would you say to prepare them for the listening experience?
COOPER: I'd say "Grab a cold one and hang on!"
MATT: "Hope you like it, if you hate it give it to someone you think might like it. And, if they hate it, it makes a great drink coaster. Unfortunately, it does not repel mosquitoes."

JEFF: If you had a helper monkey, which band-related task would you want it to do in order to help you the most?
COOPER: A helper monkey! Wow. Actually Pawley [drums] is my helper monkey. But he's a sucky monkey! He's supposed to flyer the city before every show. But he seems to have a hard time getting the job done. So if I could have another helper monkey in addition to Pawley I'd hope he'd flyer and do internet promotion for all our shows. That would be awesome.
MATT: I'd want my helper monkey to haul the gear and find some beer. I think I speak for every musician when I say that hauling your gear down icy steps or in the rain SUCKS! How come all the best gear is the heaviest?

JEFF: What's more important: looks or a sense of humor?
COOPER: Sense of humor hands down!
MATT: Seeing that this question made me laugh, I guess it would be sense of humor.

JEFF: What's more tasty: Jack In The Box or Del Taco?
COOPER: Do I even have to answer that? Del Taco of course! Jack in the Box has fingernails in their burgers!

JEFF: If you had the money, would you buy one of those special mattresses they sell on TV; the ones made with NASA material that doesn't let wine spill or something?
COOPER: I don't have TV so I haven't seen the ad for the mattress you're talking about. But it sounds pretty cool. If I had the money I'd probably buy it. Especially if it hides wine stains! That could come in handy.
MATT: Yes, I'll buy anything made by NASA. I support the space program. Save the Hubble telescope! I'm a total space nerd. I know the exact location of the Mars rovers at all times.
JEFF: What's your take on the Los Angeles music scene?
COOPER: It's an exciting time to be a musician here. It feels like something is really happening. There's an electricity in the air. When we began, these promoters were charging $15 and lumping us on bills with bands that weren't like us at all. We'd play sandwiched between a Christian death metal band and the next Arlo Guthrie! […] After paying the cover, paying to park, and buying a beer our fans had already spent $30. That's part of the reason we started booking our own night. It's called Kiss or Kill and it happens every Tuesday at the Echo in L.A. We keep the cover low, $3, have drink specials all night long and make sure all the bands are right stylistically. The only way to get booked is to show up and support the scene. It's become a collective of sorts. All the bands have taken over duties to make the club run. No one makes any money off the club. It all goes back into a pot to pay for club costs, a compilation CD, etc. Music should be about music, not money! Now there are lots of free or cheap shows all over the city. And you see bands piggybacking on one another, building their fan base together.
MATT: It's in a transitional place, which is always healthy. There's a lot of new sounds coming out of here. It's almost like anything goes. I like the diversity. There's still plenty of bands trying to give record labels what they think the labels want, but there's just as many bands doing their own thing and I like that.

JEFF: Your sound is often described as "X meets the Jam." If X actually met the Jam in a dark alley, who would end up with whose wallets?
COOPER: Oooh. That's a tough one...God, I don't know. Okay, I have to say X and here's why: I'm convinced Billy Zoom may very well be an alien. His guitar playing is almost unhumanly good. And have you ever seen him play? The look on his face while he's playing makes him look like someone from another planet. So, I'm convinced if X and the Jam had a brawl, Billy would summon his buddies from the planet that he comes from and his otherworldly friends would come down and pull some crazy alien attack shit on the Jam and the Jam would lose their wallets.
MATT: Gonna have to go against Cooper on this one. Although John Doe would be a good fighter, the Jam are three London street toughs and I think they'd come out on top because I don't think DJ and Billy would want to fight. So it'd be three on one. Although if Exene's been drinking she could be trouble. Yeah, in the end I'm gonna have to go with the Jam.

JEFF: Who is your biggest fan?
MATT: My mom. Or maybe my sisters. I'm very fortunate to come from a family that always supported my playing.
COOPER: Matt's mom. Hands down. She travels all over the country to come see us play on tour. She's the coolest 65-year-old lady you'll ever meet. I remember when the last White Stripes album came out. She called us up insisting we go buy it right away because "it's a really good record." She's unreal!

JEFF: Who do you WISH were your biggest fan?
COOPER: I'm happy with Matt's mom. But, it would be cool if David Bowie were our biggest fan. That would be really cool.
MATT: That's tough. Chris Farley. He'd be fun to have down in the pit. But, he's dead so I guess it doesn't matter.

JEFF: If your band were actually The Three Stooges, which stooge would each member be?
COOPER: I'd be Larry for sure. Matt would be Moe and Pawley would definitely be Curly.

JEFF: Who would enjoy your latest album more: Jesus or Satan?
COOPER: This question reminds me of this card that Pawley picked up in a bathroom in Tennessee somewhere. It's a church's business card with a pair of praying hands on it and it says "Give Jesus a try. If you don't like him, it's all right. Satan will always take you back!" We've got the card taped to the dash of our tour van. Every time I see it I have to laugh. So I guess Satan would like our album more, since he's super down with embracing Jesus' leftovers. And all of us are definitely Jesus' leftovers. Although I think Jesus would probably dig our record, too.
MATT: Depends on if there's beer in heaven.

JEFF: If there is a heaven, what would you like to hear God say when you get there?
COOPER: "Let there be rock!"
MATT: "Joe Strummer and your dad are waiting in the pub. They already bought you a drink. Oh, and we don't call last call here." 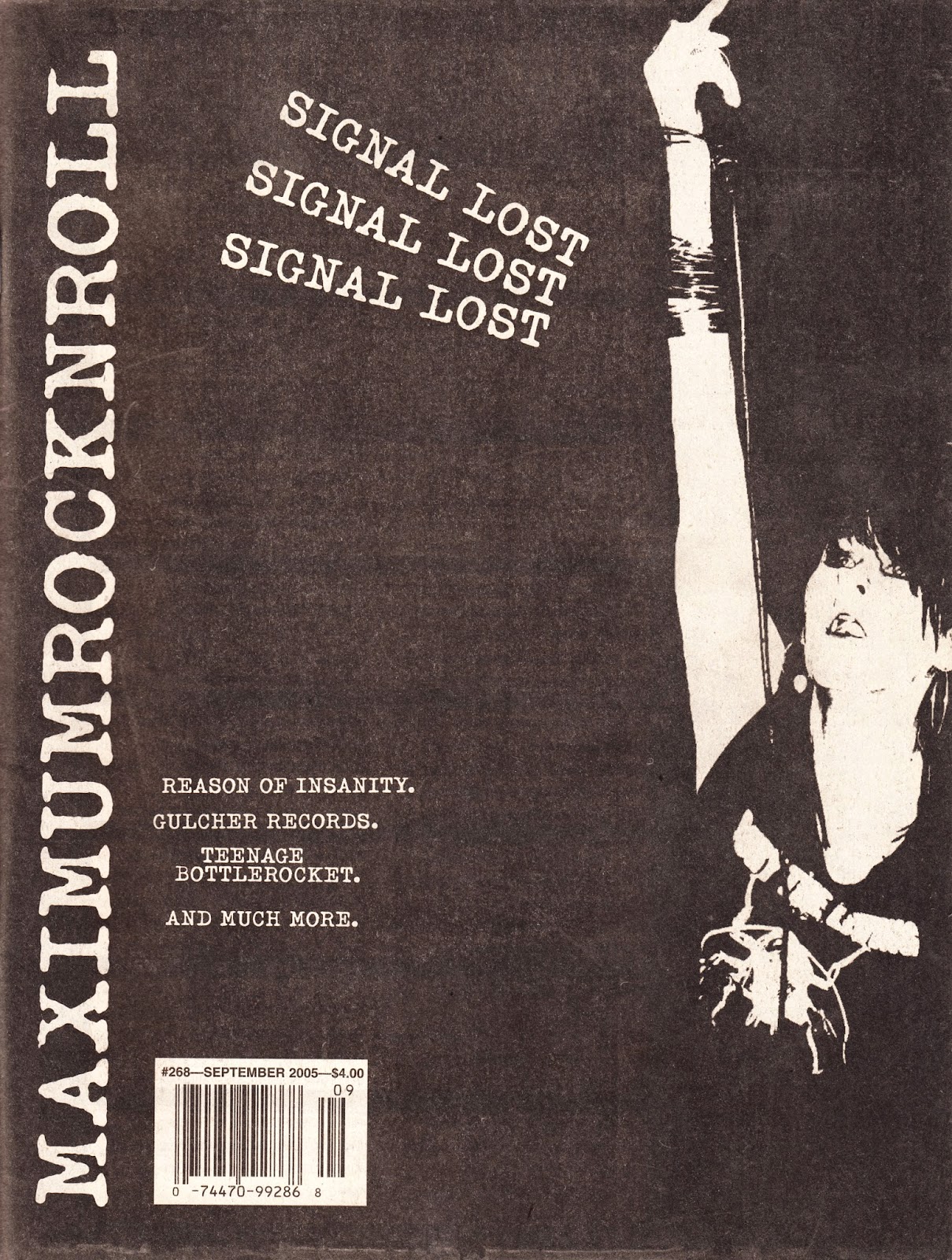 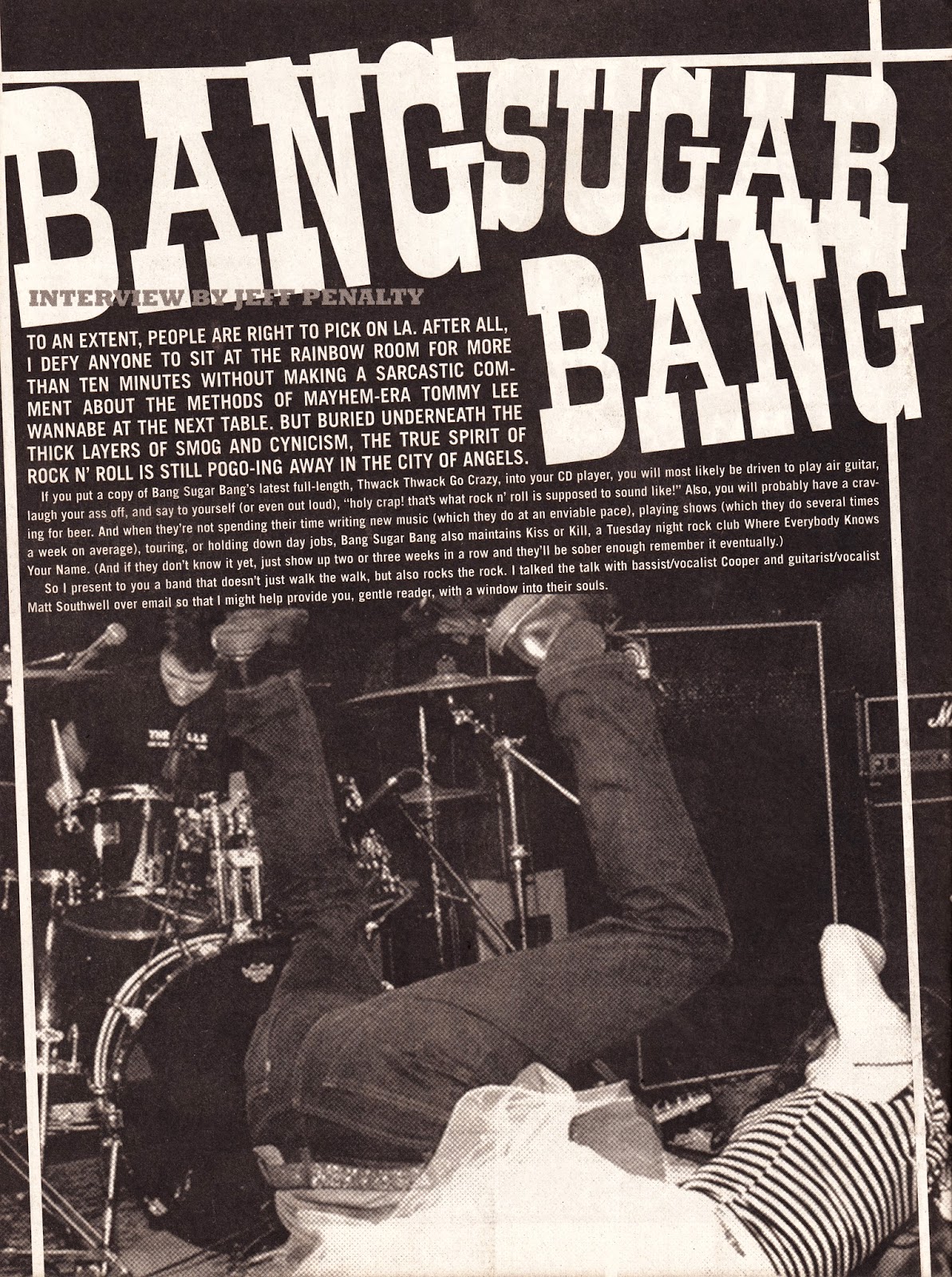 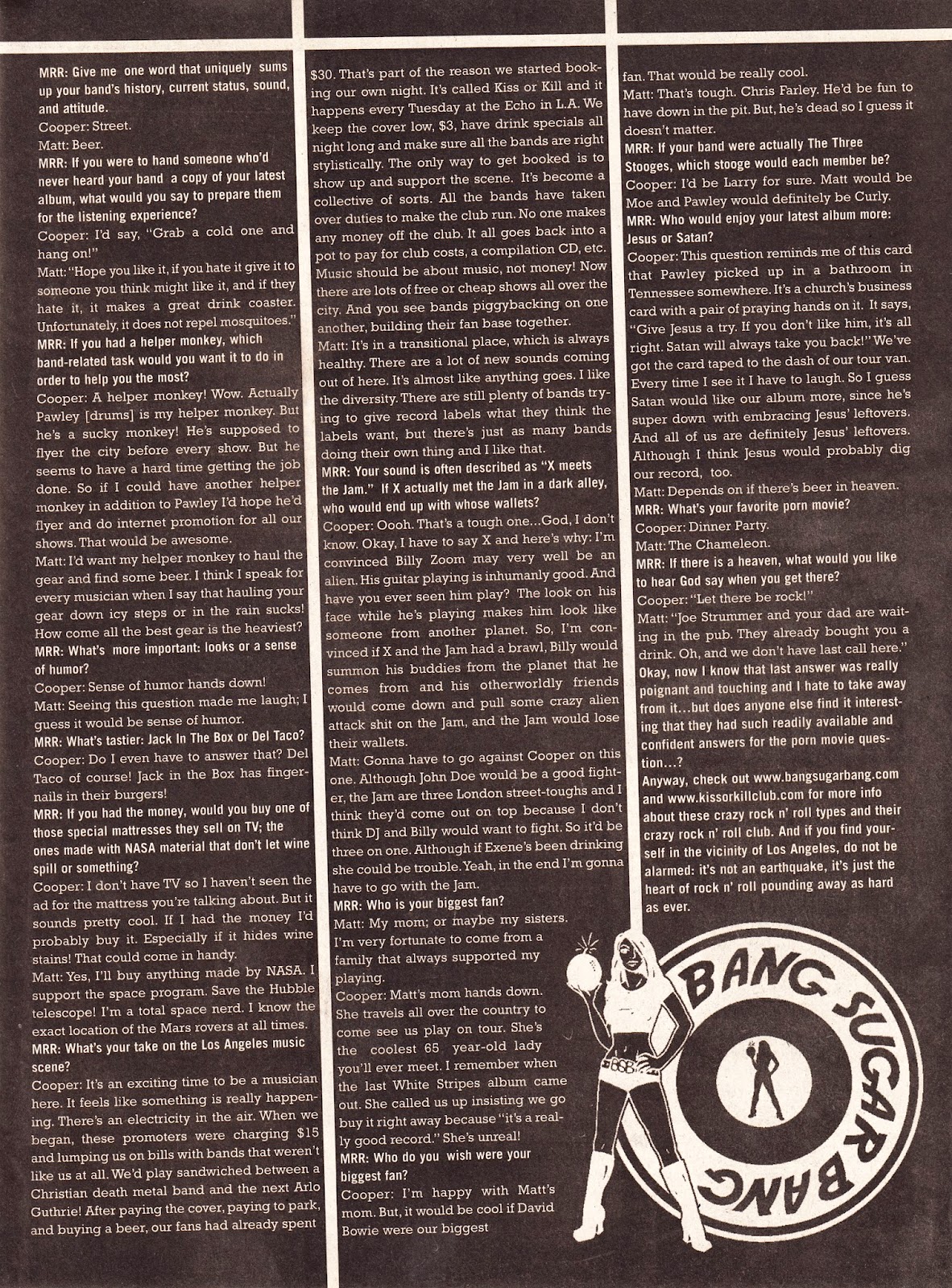