When one thinks of hippies, one tends to conjure up the image of a shiftless, paranoid, drug-crazed, patchouli-wearing, granola-eating, self-righteous know-it-all who won’t stop lecturing you about how evil your car is.  John Van Hamersveld is most decidedly a hippie, yet he is none of the above.  Well, maybe the drugs…and I’m not sure about the granola…but everything else he is not.

It’s easy to throw around assumptions about a guy who earned his living drawing psychedelic concert posters for Cream and Jimi Hendrix.  And about one who, upon hearing about this article, forwarded me a dozen or so lengthy and rambling emails about, for instance, the post-Gen-X “Echo Boomer” generation and its sociological implications.  After receiving several of such emails—a few of which were simply slightly reworded versions of the others, some of which were random childhood photos, and one of which was a rant about an eBay sale of a t-shirt that featured a pirated version of one of his pieces—I thought I had John Van Hamersveld clocked.  I wrote a one-line email to my editor:

“This guy is a friggin’ nut cake.”

Regardless, I was pressed to continue with the story, so one day, while waiting for my car to be serviced, I sat down and waded through all of Van Hamersveld’s seemingly irrelevant emails.  As the television in the waiting room went from “Montel” to “Cops” to “Home Improvement” to “Married with Children” (What the hell are they doing to my car back there?), I managed to excise a few interesting facts about which to query John in person.  He had met Andy Warhol.  Steve Jobs gave him a free Next computer.  He had worked with Mick Jagger.  But there was one story that seemed to rise above the rest.

In an article he personally penned, John (in between his tangential analysis of pot culture) details the process he went through to create a revolutionary design for the cover of Jefferson Airplane’s “Crown of Creation” album.  He gets stoned with Paul Kantner and Grace Slick at his apartment when they approach him about doing the cover.  He gets stoned while coming up with concepts and ideas.  He gets stoned before a meeting at RCA with the Airplane’s manager.  Finally, he gets stoned with the whole band and asks them each to give him a word, which then he then translates, while stoned, into a visual.  He coordinates an extensive amount of photo work, which, in the days before Photoshop, was a long and costly process, and finally comes up with a cover that the band and the label go bananas over.

Then they ask him about money.  He asks for $9,000.  Not too outrageous considering the work he put in and the fact that his cover design (front AND back) would be translated into a branded campaign to advertise the record.  But, of course, the label balks and nobody wants to put up the cash.  And this is where John shows that he’s not just another damn, dirty hippie:

Same old story about money: the record company leans on the manager who leans on the band who in turn leans on the artist.  Labor is value.  Even in the "new culture" we're creating everyone still wants something for nothing.  Maybe I should be reading Chairman Mao's little red book instead of Eye Magazine.  Only after meeting with attorneys is the matter settled.

This guy is my kind of hippie.  And by that I mean he lives his life with his eyes and mind open and with art and humanity as top priorities, but with his feet planted firmly, and unapologetically, on the ground.  Raised by scientists (no, not in a lab…his grandfather was an inventor and his father designed jets and satellites) and nurtured by a grandmother who was a Wall Street investor and a mother who was a fashion model and a painter, and later rooming with a friend who was a business school student, John was able to equally exercise his right and left brains, allowing him to create as well as to find ways to continually fund and sustain said creation.  Rather than bemoaning the sad fact that we’re all slaves to the corporate structure, he accepts that structure as a reality and finds his own way to rebel within it.  Instead of idly talking about revolution, John Van Hamersveld lives the revolution—by changing the rules of their game to uncompromisingly pursue his passions.  And not taking any shit from his fellow granola-heads along the way.

John’s personal revolution was born in the mid-1950s when he fell in love (as hippies will do) with surfing.  In the early ‘60s he moved to Dana Point, California and the crew of surfers he mixed with at the time were focused solely on surfing and more surfing, so each of them tried to find a way to support their habit, preferably by doing something that related to the sport.  Some would shape and/or sell boards.  His neighbor, John Severson, founded Surfer magazine.  And a guy named Bruce Brown started making a movie called “The Endless Summer.”

Van Hamersveld had started Surfing Illustrated magazine, which led to him working with Severson on Surfer, which in turn led to him doing advertising work for Hobie Surfboards.  He met Brown when “Endless Summer” was in post-production and took a freelance job creating a poster to advertise the film.  Van Hamersveld organized a photo shoot (Brown himself is the figure in the foreground of the poster) and turned the resultant photo into a graphic image while taking night classes at Pasadena’s now-famous Art Center College of Design.  He was paid $150 for the finished poster and pretty much forgot about it after it was sent into production.

Of course, the film became a watermark (pun very much intended) in the world of surf documentaries and John’s image resonated heavily with those who identified with surf culture.  Hard to imagine that something like that would continue to generate income and decorate college dorm rooms all the way into the next millennium, but the fact that the poster has endured is a testament to Van Hamersveld’s power as a visual artist.

That power was recognized at the time by Brown Meggs, who signed the Beatles to Capitol Records.  Meggs soon hired John as his personal art director.  Among his new duties?  Designing the cover for the Beatles’ “Magical Mystery Tour” album.

Having designed both a Beatles album cover and a world-renowned movie poster would probably be enough for the average artist to consider him or herself a success.  But for John, whether he knew it or not, this was only the beginning.

Just as he had immersed himself in the surfing scene, John immersed himself in the music scene in the late ‘60s, founding Pinnacle Rock Concerts, a concert promotion agency.  He designed 19 concert posters between ’67 and ‘68, each more iconic than the last.  His images of Jimi Hendrix, the Pinnacle Indian, and the Space Cowboy encapsulate the vibe of the era and re-prints and re-imaginings of his concert posters continue to sell today.

And then there was that whole Jefferson Airplane business.  And the Rolling Stones’ “Exile on Main Street” album and accompanying ad campaign, which connected John to Mick Jagger.  Which is why Jagger was wearing one of Van Hamersveld’s “Johnny Face” t-shirts in a photo that appeared in New Music Express.

I interviewed John at his home in Santa Monica and I trolled through all of his lengthy emails, but I was still a little confused about the Johnny Face, and I needed to fill in a few other gaps as well, so I sent him a brief email containing four simple questions.  I got back EIGHT enormous emails, three of which contained photo attachments.  Goddammit…

I started to read through the 38K (text only!) email that contained the lengthy story of the Johnny Face and realized that it was an article he’d sent before and that it didn’t contain the details I needed.  Rather than risk another assault of emails, I’ll just go with what I’ve figured out.  Long before Shepard Fairey started dotting the urban landscape with Andre the Giant, the Johnny Face poster was everywhere.  A simple, smiling, psychedelic character that took hold of the public consciousness as the ‘60s gave way to the ‘70s.  Later, John added the phrase “Crazy World Ain’t It” to the face and it was distributed as a button and a t-shirt.  It became so wildly popular that John was now being referred to as “Johnny” by clients and acquaintances and the KRLA radio station licensed the image to appear on 250 billboards in L.A. and Orange County.

Ever shrewd, John requested that 25 of those billboards be located near record labels and ad agencies.  Hardly the kind of self-promoting genius you’d expect from a guy who was doing his fair share of mescaline at the time.

And hey, did you know that John also designed the original trademark for “Star Wars”?  They ended up tweaking his design just enough so they didn’t have to pay him, but back in the day he used to hang with George Lucas and even attended a few “Star Wars” production meetings with other like-minded artists.  Of course, when I find this out in the interview I can’t help but get sidetracked with nerdy questions about Lucas, but we eventually move into the ‘80s, when John moved from drawing into architecture, got into computers, and started focusing on developing trademarks and signage for companies like Contempo Casuals and the Broadway Deli, which led to him being commissioned to design a mural for the Olympics which wrapped halfway around the L.A. Colisseum for the ’84 games.

Again, one has to wonder what kind of standard of success this guy must have to not retire and pull a Bobby Fischer-style disappearing act after that kind of recognition.  But a few years later John raised his own bar by designing Fatburger.  If you don’t live in L.A., you probably don’t appreciate how omnipresent (or tasty) Fatburger is, but the local burger chain is considered an L.A. institution.  John not only designed their logo, but the entire retro look of the restaurant and the unique architecture of their buildings.

And then, one day in 1993, while riding his bike, he went over the handlebars and shattered his elbow.

While he was supposed to be healing, he was drawing, forcing himself to recuperate while creating 200 sketches for the Octopus Army Stores in Tokyo.  He ended up selling them 14 t-shirt images for $75,000 and the company made millions off of his designs.  Take that, you stupid bike!

As he reacquainted himself with drawing again—after years of working mainly on computers—he also reacquainted himself with his ‘60s roots.  So it seems fitting that as 2005 draws to a close John Van Hamersveld is going on the road to promote a poster he designed in his signature ‘60s style for the Cream reunion concert at the Royal Albert Hall in London.  All at once, art, music, culture, and John Van Hamersveld have finally made a complete circle.

Through a combination of keeping his mind open, his wits about him, and his ambitions ever-reaching, John Van Hamersveld built a career of which any artist would, and rightly should, be envious.  His work has steered the way album covers, concert posters, corporate trademarks, and architecture are looked at today.  And with the birth of each new generation comes a re-birth of interest in his contribution to the world of art and design.

Now I get why he sent me that “Echo Boomer” article…! 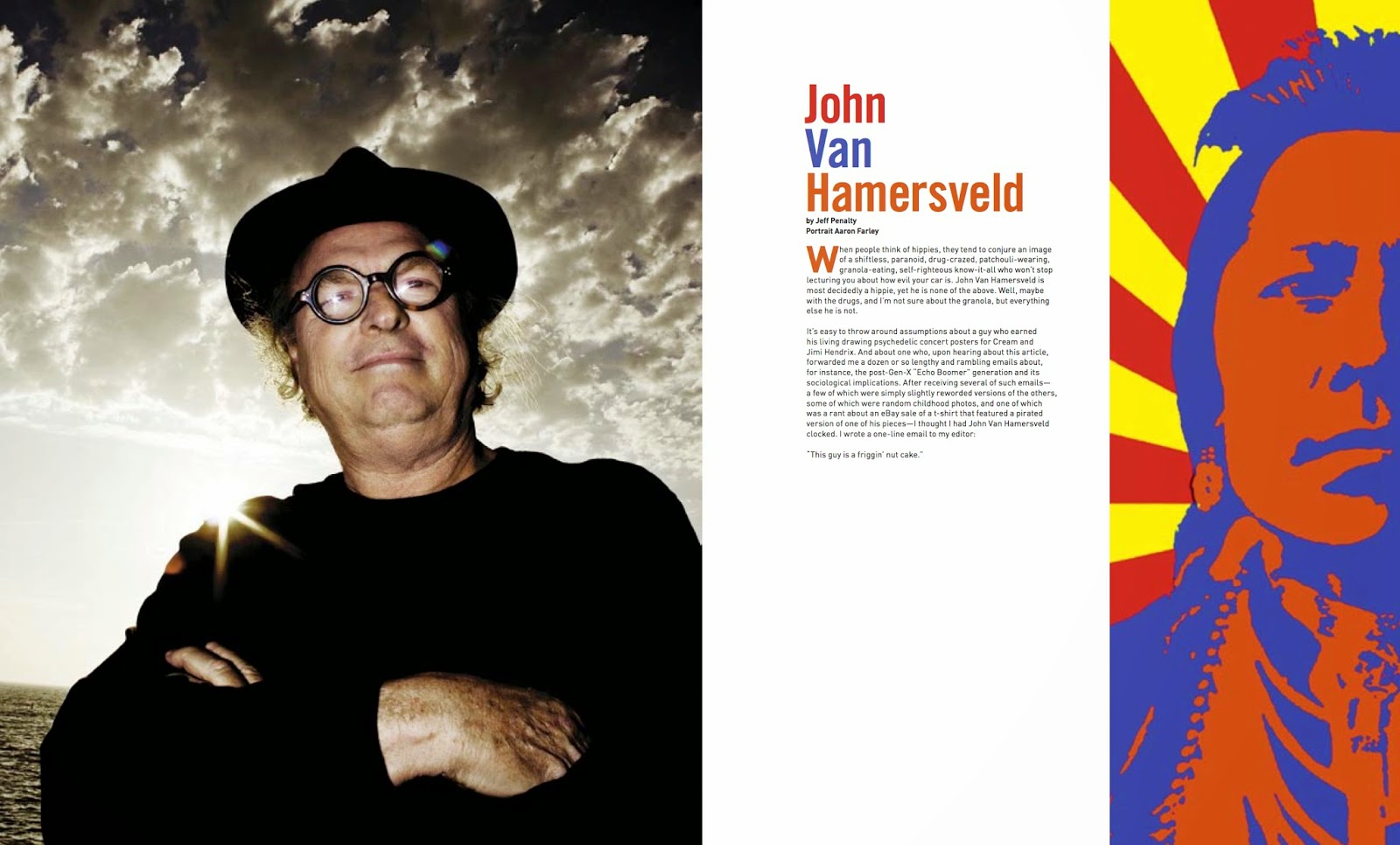 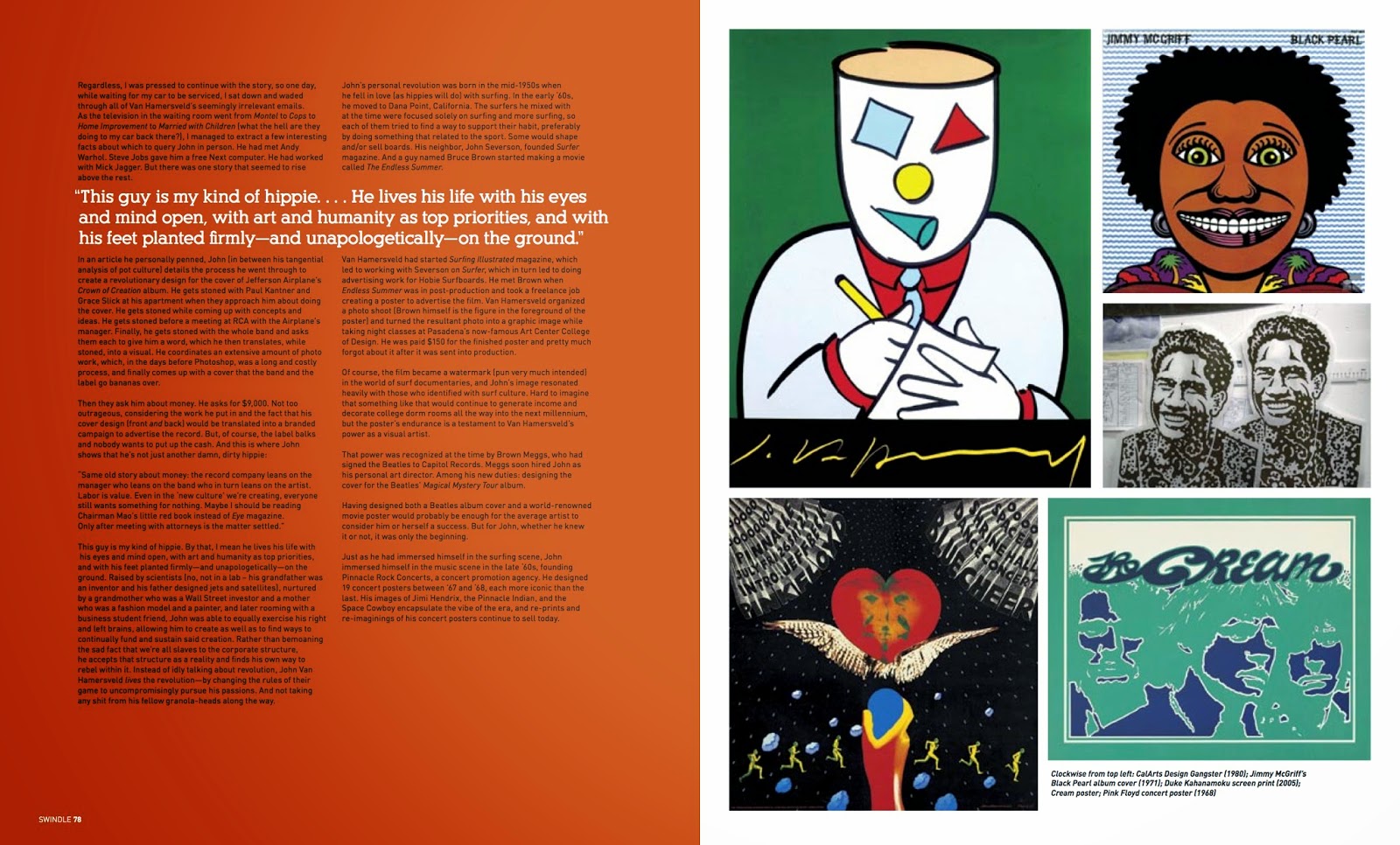 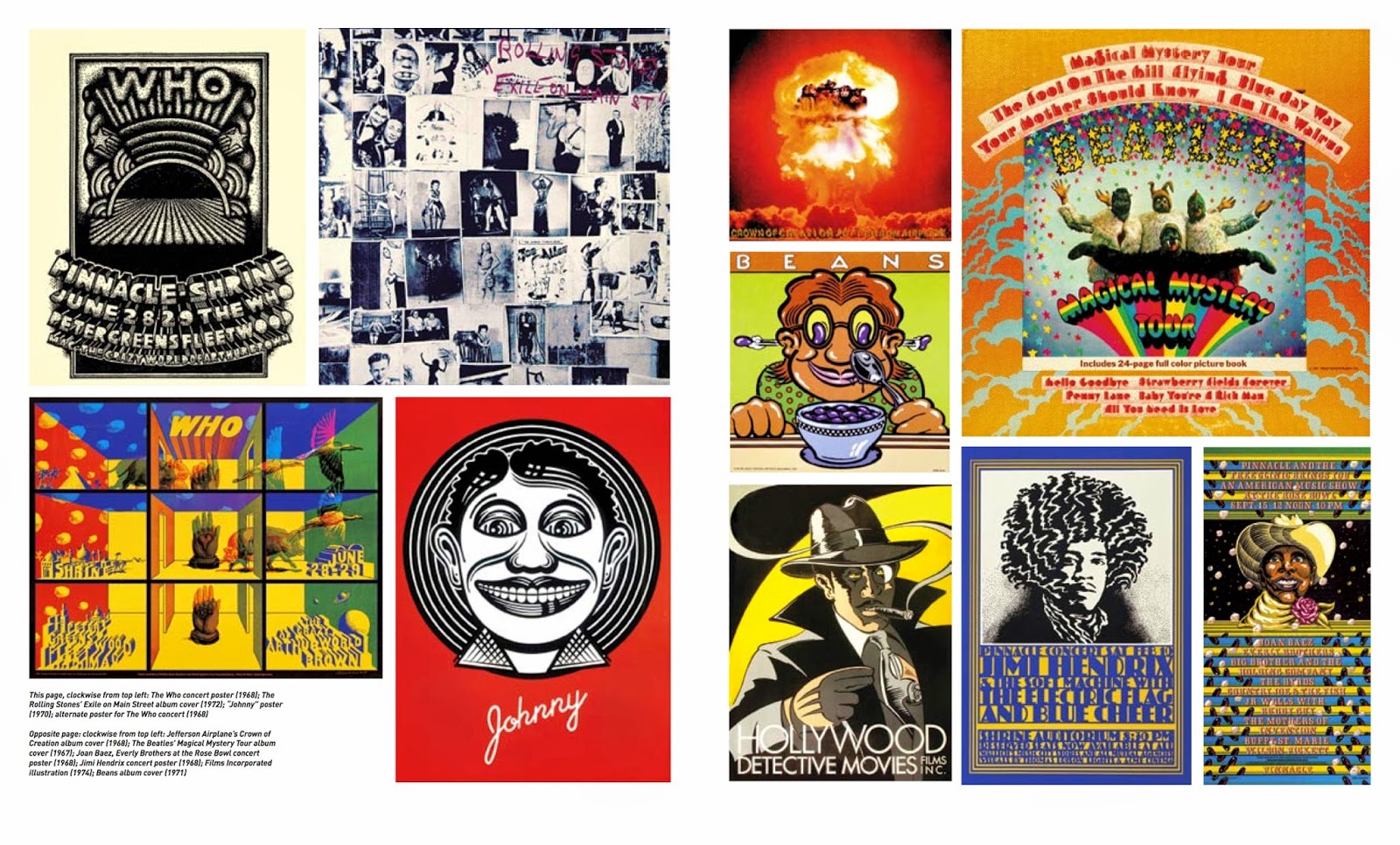 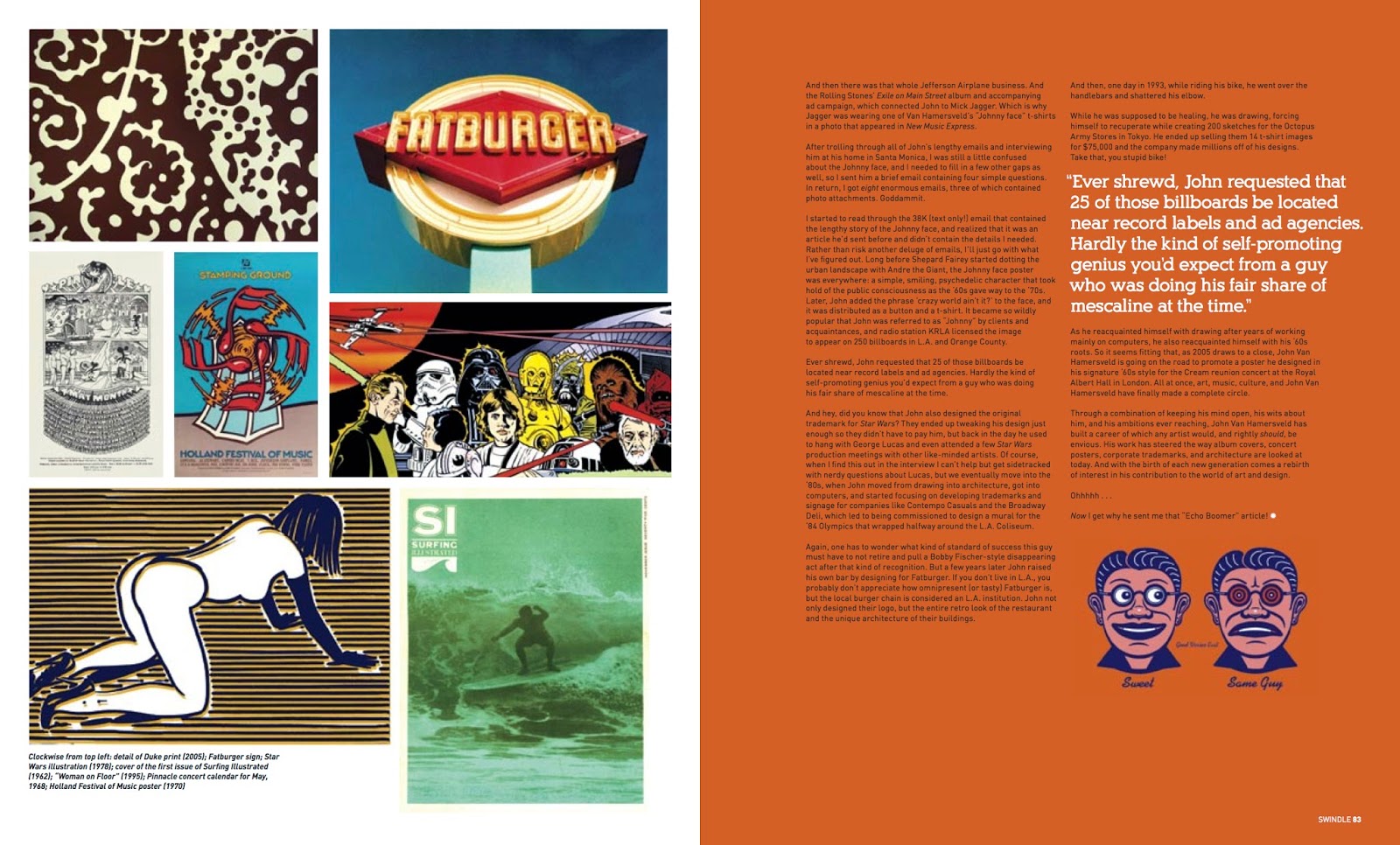